“There is a photo of Carmen, standing in front of a truck full of grain, with her rake. She stopped the truck and called us ‘Come on, come on, I have him stopped here! Hurry up!’ ‘I'm coming,’ said Gringa, ‘I haven't combed my hair.’ I started filming, and Gringa came running behind in her flip flops. Carmen was holding the garden rake with which she had been cleaning the footpath, Rosa was next to her providing backup support, sticking her chest out.”

Silvia, from Vecinxs Unidxs por un Ambiente Sano (VUDAS), is telling us this story. There are geese and dogs in her yard. There is also a strange, thick smell that fills your lungs minutes after entering the area. A fermenting smell, and something like a hospital. 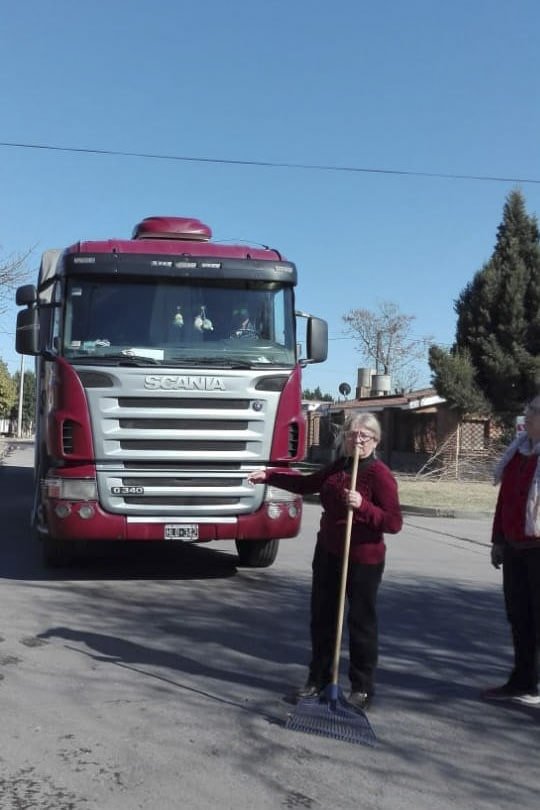 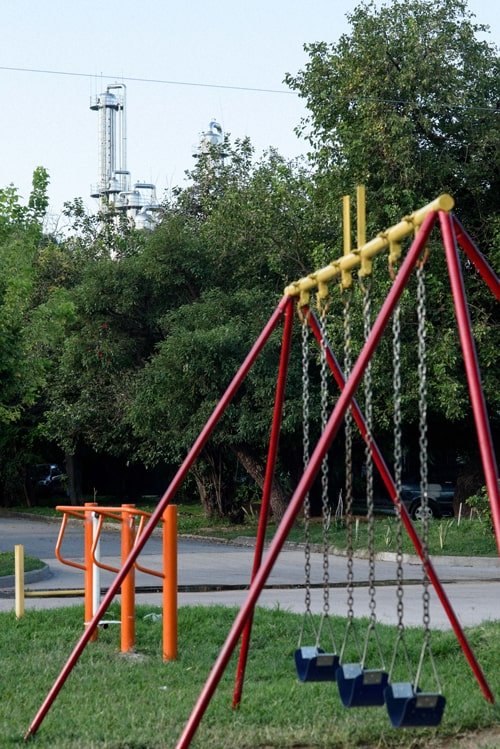 We are in the San Antonio neighbourhood, Cordoba, Argentina. An old neighbourhood, which used to be almost considered the countryside and that today is included in the urban grid. It is located crossing the ring road that circles the city, along Valparaíso Avenue heading south. San Antonio is minutes from central landmarks in Cordoba - just 20 blocks from the popular National University Campus, 30 blocks from the trendy Plaza España. It is also just a few metres from private neighbourhoods and new gated communities in the south of the city.

Next to Silvia's house is the Porta factory. Industrial chimneys, billowing smoke, noise and lights 24 hours a day, 365 days of the year. That's where the smell comes from. “On hot days or when there's a northerly wind it is unbearable,” says Silvia. Later Rosita adds “Today the smoke has an almost bluish tinge to it. Sometimes it is grey, sometimes black.”

Rosita, Natalia and Mary, with whom we spend the afternoon, are also part of VUDAS. Over the course of the afternoon they tell us how, since 2012, they have fought in court to have the factory in San Antonio, their neighbourhood, declared illegal. They share how they organised themselves to ensure their case did not get lost in the court corridors, and how today it sits with the Supreme Court of Justice, the highest court of law in Argentina. 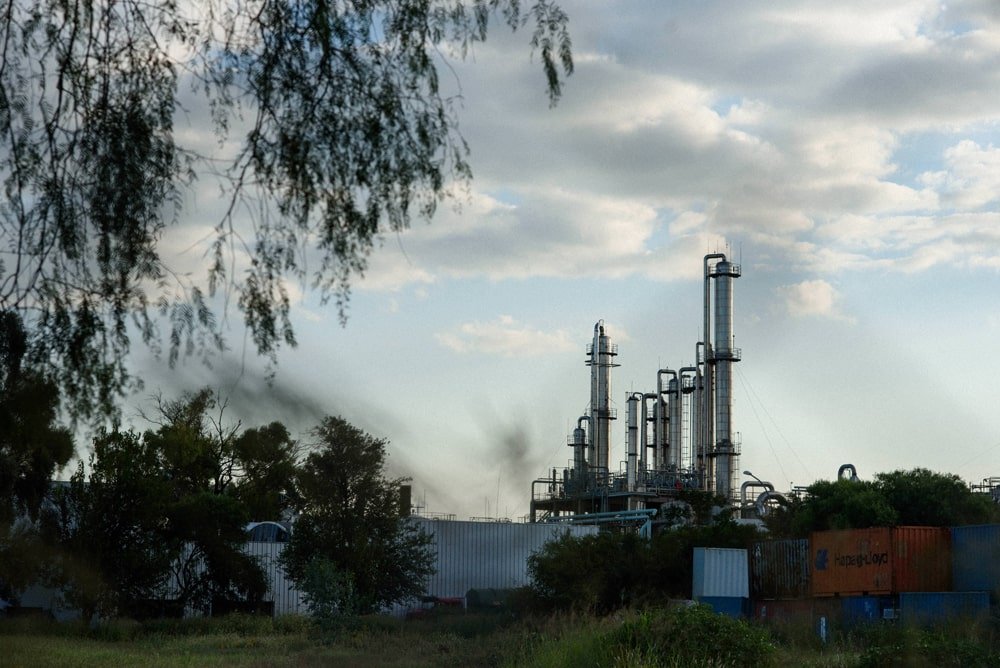 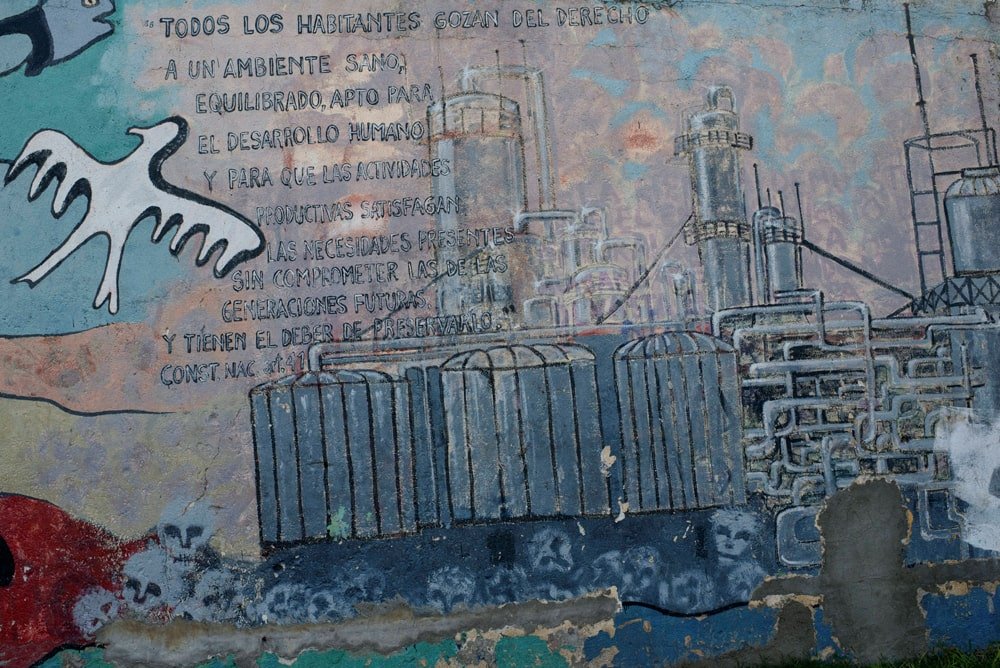 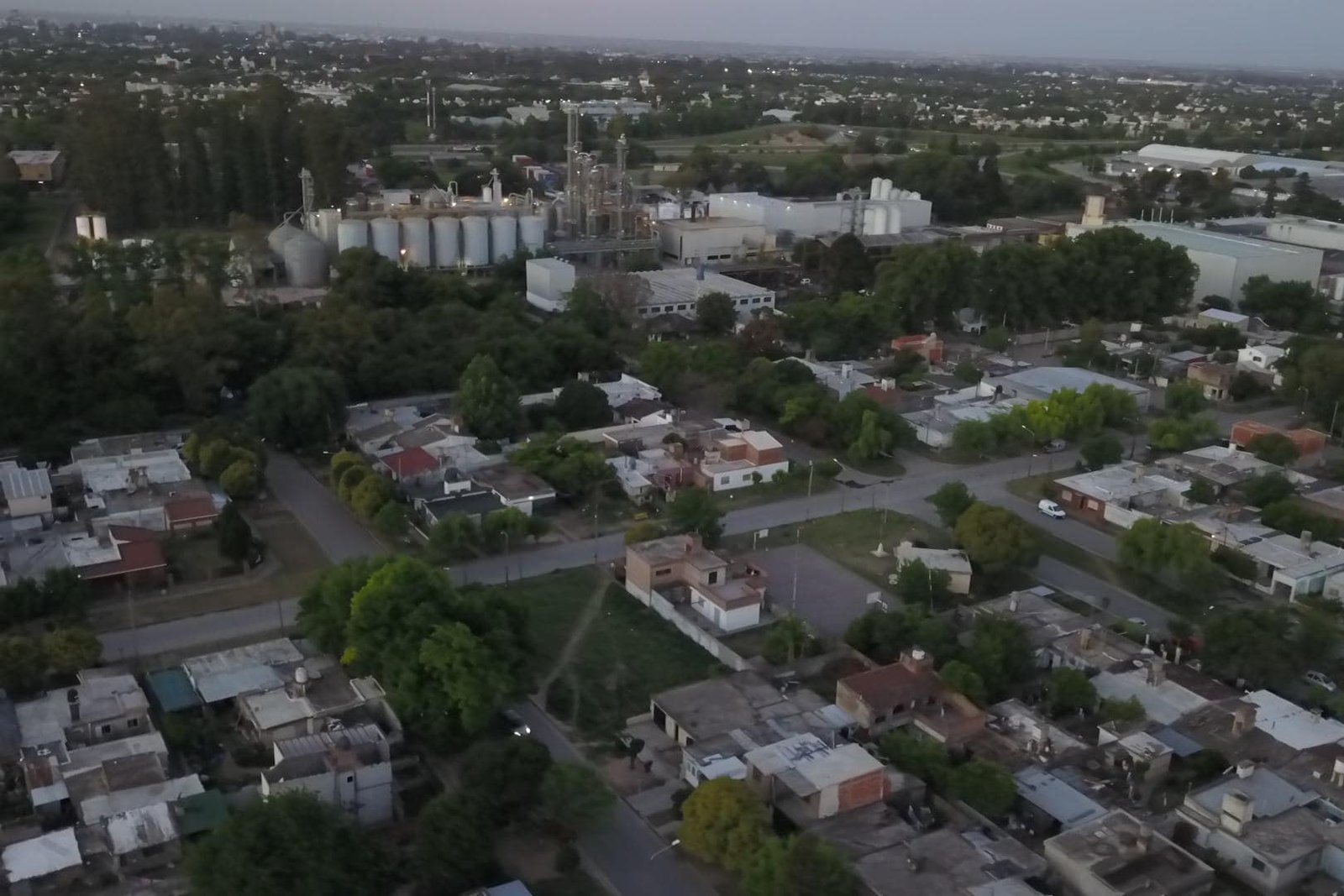 The members of VUDAS tell us how in 2012, Porta tripled in size and began producing ethanol to make medicinal alcohol and beverages. They also make vinegar. Ethanol would also be used for biofuel, something that VUDAS have been demanding be thoroughly investigated.

In 2009, Al Gore, former vice-president of the United States, received a Nobel prize for promoting the production of biofuels as an alternative to fossil fuels. Two years later, he himself warned about the dangers of this, foreseeing that by using oilseeds to produce fuel, there was among other things, the risk of increasing the price of food globally. Silvia, living in the San Antonio neighbourhood, sums it up saying “It's a circle, this is the heart of agribusiness.”

How does that circle operate? As we walk through the neighbourhood and take what VUDAS call the ‘Toxic Tour’, they explain everything. “Can you hear that? That's the silos filling up with corn. It is transgenic corn”, they say, “fumigated with pesticides, which get into the air, into the lungs, and into the kidneys. Just as the polluting compounds used to produce ethanol do.” When we turn the corner, on the other side of the factory, three trucks come out. “They are carrying the by-product called burlanda, which is the rest of the corn after distilling the alcohol.” Where are they taking it? “To feedlots, they use it to feed cattle, pigs, and make balanced animal feed.” 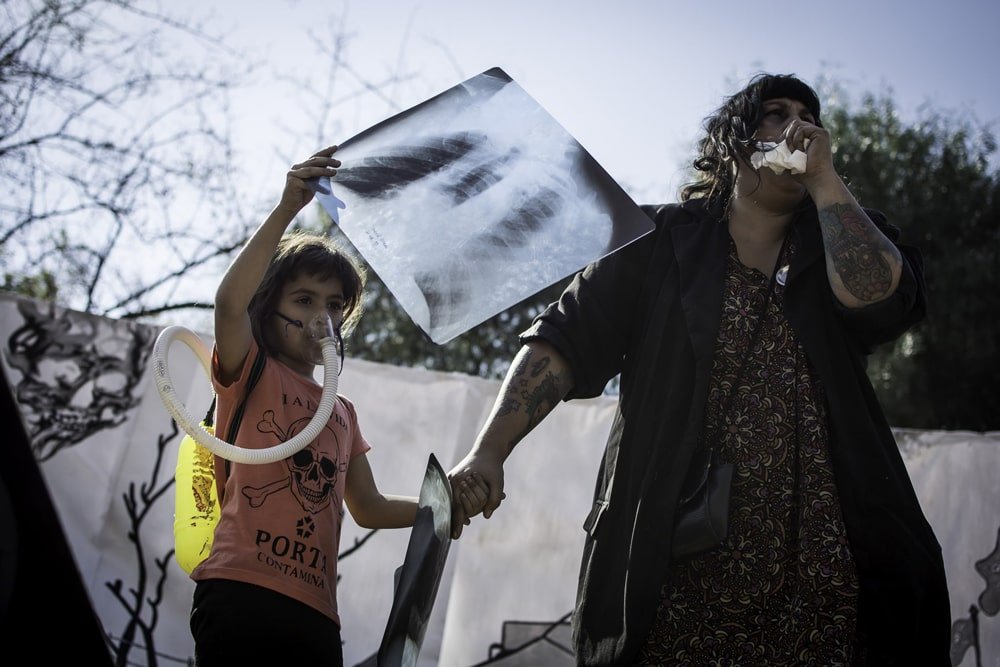 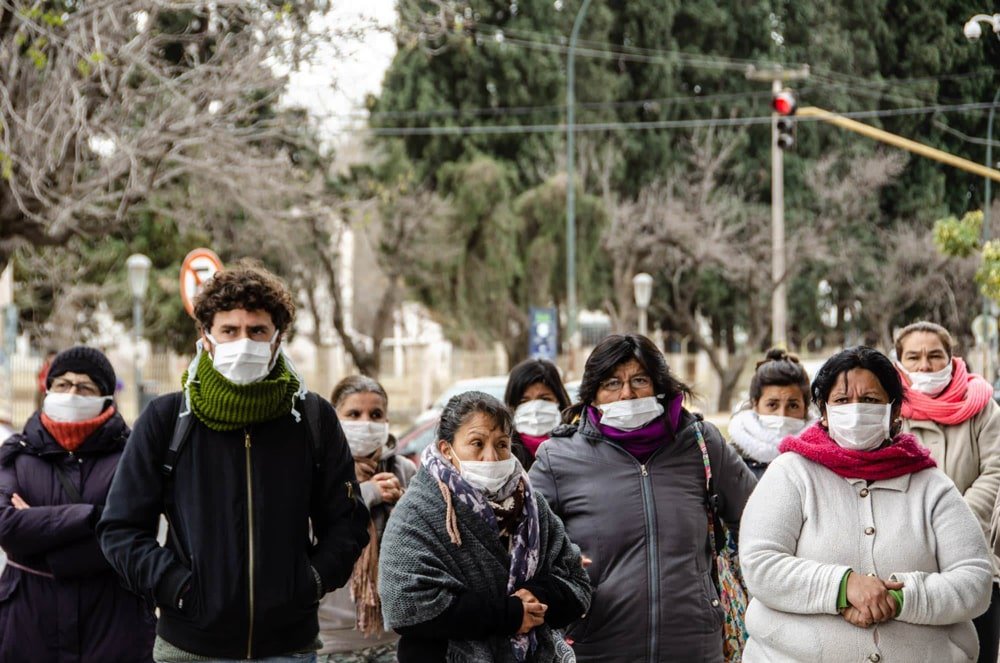 In order to produce the industrial quantities of alcohol that Porta produces, the neighbours highlight that the factory could also push the utility services in the neighbourhood to breaking point. This situation has been made even worse by the pandemic, due to the very high national demand for their products. New houses in the area cannot connect to the natural gas network because they are told the pressure levels fall short. The factory uses hundreds of thousands of litres of water per day, which presumably end up in sewers and underground water supplies. And a recent problem that they've warned about is the drylands vesper mouse, which carries Argentine hemorrhagic fever, that has appeared in some houses and which could have arrived in San Antonio in trucks carrying grain.

At the moment, a law on biofuels is being debated in the National Argentine Congress. It was in that same Congress where the women of VUDAS received the Berta Cáceres Award on March 5, 2021 for their struggle as environmental defenders. 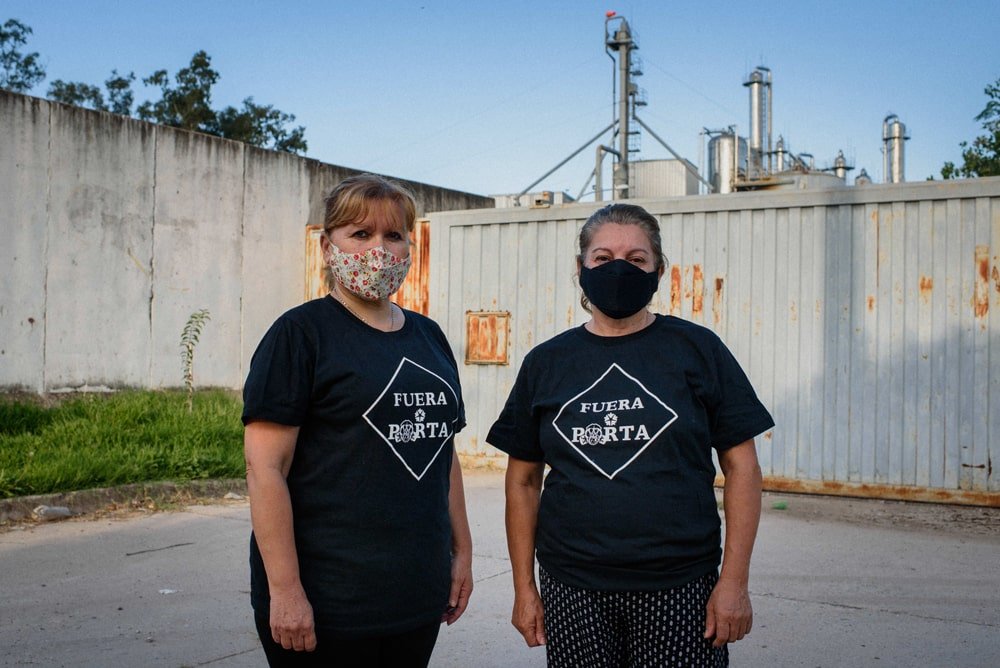 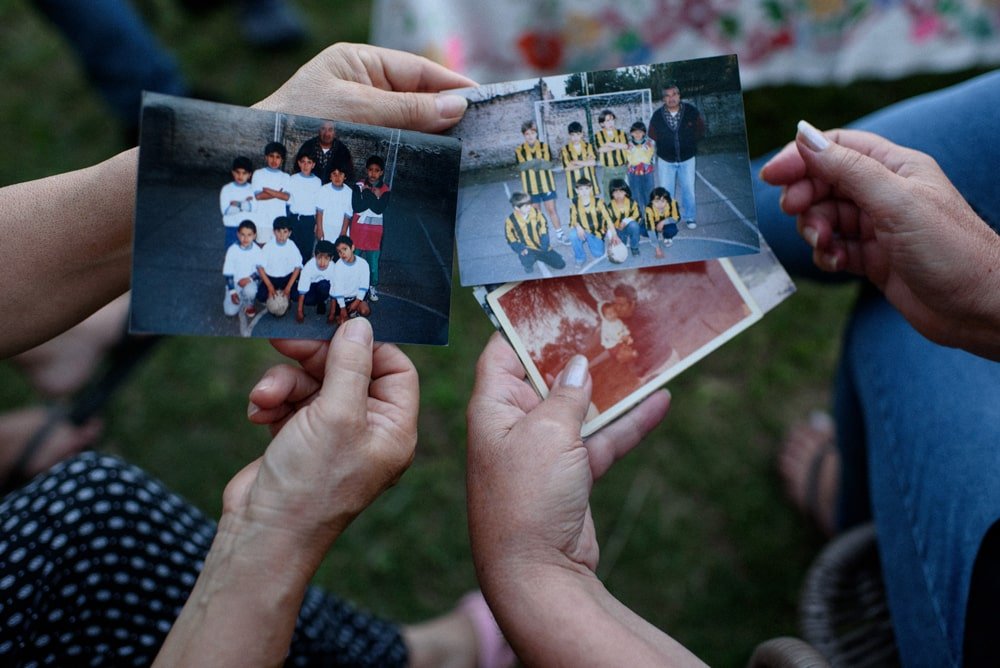 VUDAS is the organisation these women spearheaded to denounce the illegality of the company's factory, which is currently owned by a Swedish company. That is why, what they call the ‘Toxic Tour’ is also a tour of the organisation's history.

We walk past a corner, it is Carmen's house. She is the one in the photo at the beginning. It is where VUDAS held their first meetings. We go to the neighbourhood plaza. “Here we paint murals, because we get tired of having our posters taken down.” In one of the murals, Section 41 of the National Constitution is copied. ‘All inhabitants are entitled to the right to a healthy and balanced environment fit for human development in order that productive activities shall meet present needs without endangering those of future generations; and shall have the duty to preserve it.’

The Community Centre is also in the plaza. They fought for it at elections, they say, when Porta tried to impose a list of representatives related to the factory's presence in the neighbourhood. The candidates promoted by VUDAS won with 80 percent of the votes.

As Silvia points out, they've always fought within the system, using its own tools. When disputing spaces for political construction, fostering dialogue and neighbourhood participation as well as when they presented their case against the legality of the factory before the courts, they followed each step outlined by the judicial system itself.

We continue walking and go behind the production plant, where the neighbourhood changes name to Inaudi. “We did a health survey here, and the results were the same, the same problems,” says Rosita.

She is referring to a comparison of results from the genotoxicity studies they conducted with a biochemist, which were used as evidence in the court file. They collected urine samples from ten people who live next to the factory and from ten people who live eight blocks away. In both cases, toxic substances such as toluene, xylene, formaldehyde, acetone were detected in the urine.

These substances are in the air. “When there is no wind and humidity is high, the smell stagnates. Because all these components are much heavier than oxygen and displace it. Not to mention the particulate matter, which are particles that enter your lungs,” explains Natalia. They know too well the consequences - this lack of oxygen could be the cause of the heart attack Rosita had in 2015. 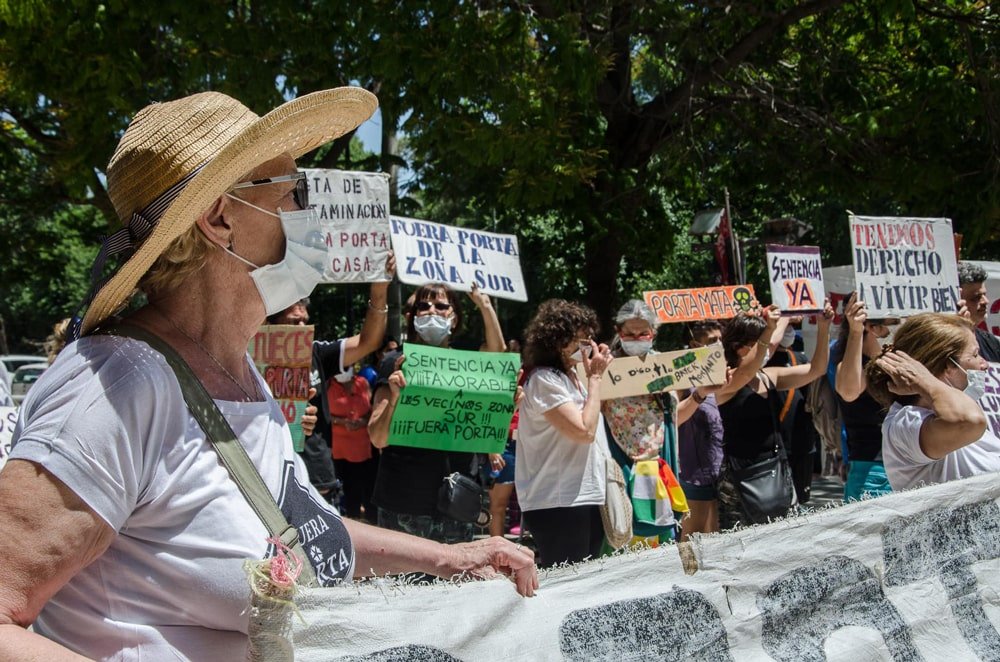 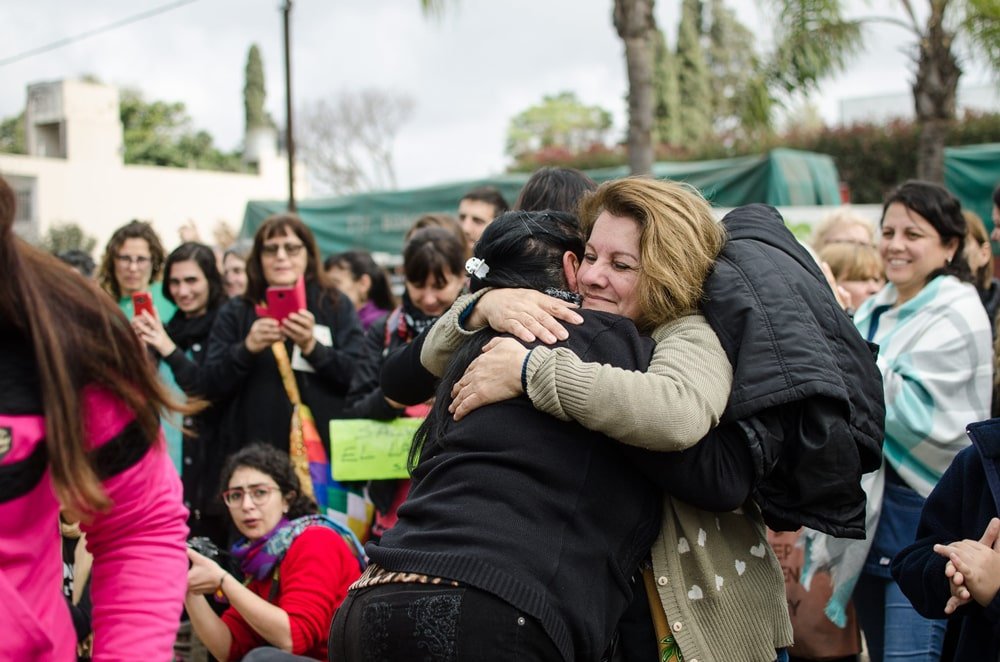 After the Tour, we sit down in Natalia's backyard, under a tree. We are ten blocks from the factory. “Today you can breathe,” she says. “When the humidity is higher it feels like you are in a bakery here.”

We chat and look at old photos - from when there were no factories in San Antonio, of the women's soccer team that was in the neighbourhood 40 years ago. We talk about future plans, about the outcome of their case. We also talk about the exhaustion that comes with it all. Natalia confesses that, “Something has happened to us, and that is because, for our own mental health, we do not want to think that in a year we will still be fighting like now.”

What do they hope happens? That the Courts apply the ‘precautionary principle’. That means that the factory has to stop working, and thus stop contaminating and harming the inhabitants of San Antonio, before the resolution of the case is reached.

As happens in any organisation process, it is clear that there is a before and after - a tipping point in the lives of these women who one day decided to exercise citizenship and make their right to a healthy environment effective. It is also clear that activism requires giving it your all and it requires time, and fighting for your cause requires doing it with others, and that it is not always easy.

“We leave our homes to take to the streets. Luckily I had a partner who supported me, but it is tough, you miss out on a lot of family time, special moments, sharing”, says Rosita.

Silvia illustrates further saying “It's been nine years of meetings, of deciding what to put on the fliers, of finding places to print, of going out with buckets of paste to stick up posters, which Porta tears down. Day after day, leaving the house, leaving absolutely everything. ‘I'm going to Rosa's, I'm going to Mary's, I'm going to put up some posters.’ At midnight, one in the morning. Once, we organised to meet at four o'clock to paint ‘Porta out. Yes to life!’ on the bridge over the city ring road. By six in the morning, it had already been painted black. And the next day we had to go to work, and leave our houses with papers and fliers everywhere.”

Natalia emphasises that that is what she admires most about the other women in VUDAS. She comes from a family with a history of political activism and it was no surprise that when there was a conflict in the neighbourhood she got involved. But as she says “they completely broke the mould about who they were and what they had to do.”

Rosita confesses that at first she did not know how to take to the streets, that she was embarrassed, “I was a housewife, and I had to learn.” she says. Mary shared the same embarrassment at the beginning, and they remember how difficult it was to hand out fliers at traffic lights, ask neighbours to roll down their car windows. 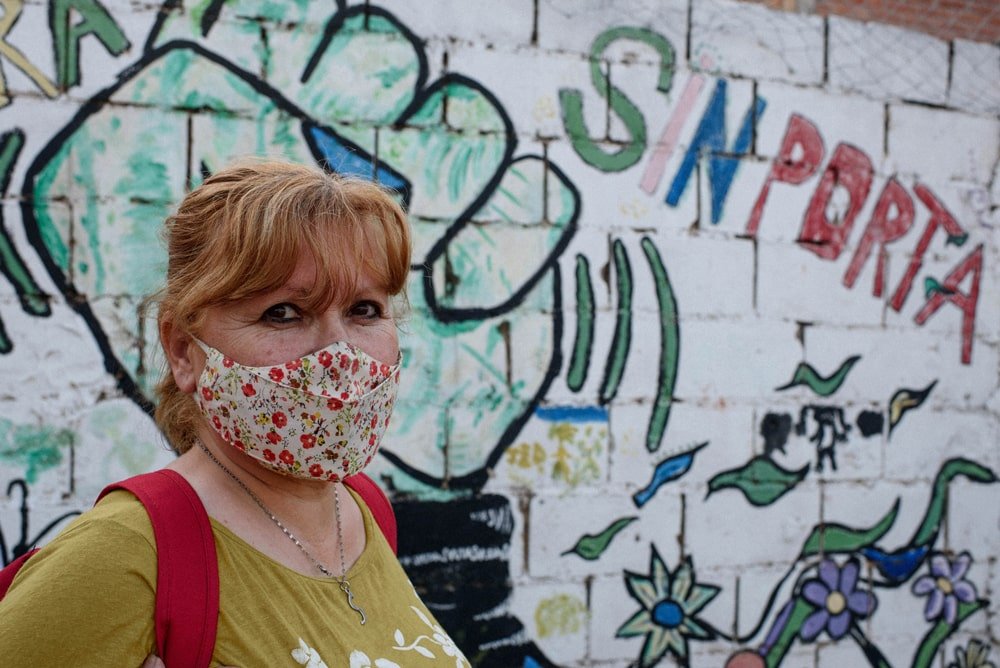 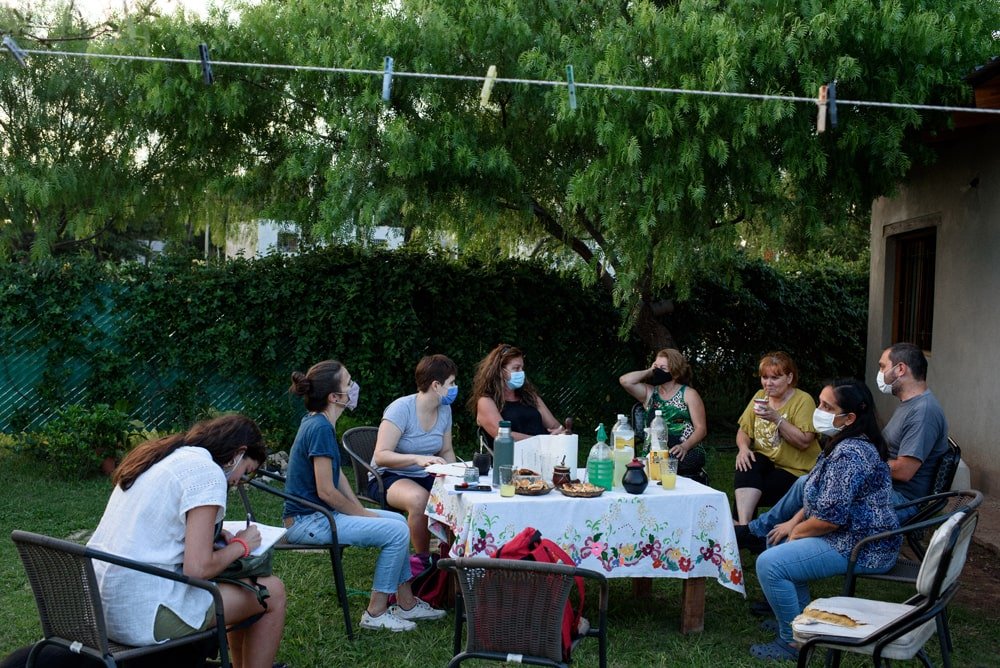 Meanwhile, the sun is going down and it is getting dark. We could talk a lot longer, but it is time to go. We are left with these words from Silvia “This struggle has made each of us think more than just about ourselves. In an age where the individual is everything, we have learned to think twice before doing anything. I think what will happen to Rosa, or Mary, or Mary's children. We've gained a sense of community. And when we see other situations, we know that at least we have each other. We have each other and nothing can stop us. We are struggling, we are getting poisoned, we may not be as healthy, but we have lots of resources to keep fighting.”

On the way back, we drive past the factory again. It never gets dark here. Lights and noise indicate non-stop production. The heart of agribusiness that beats and does not stop. In the middle of a neighbourhood that was once almost considered the countryside, and that today wants to be able to breathe once again. 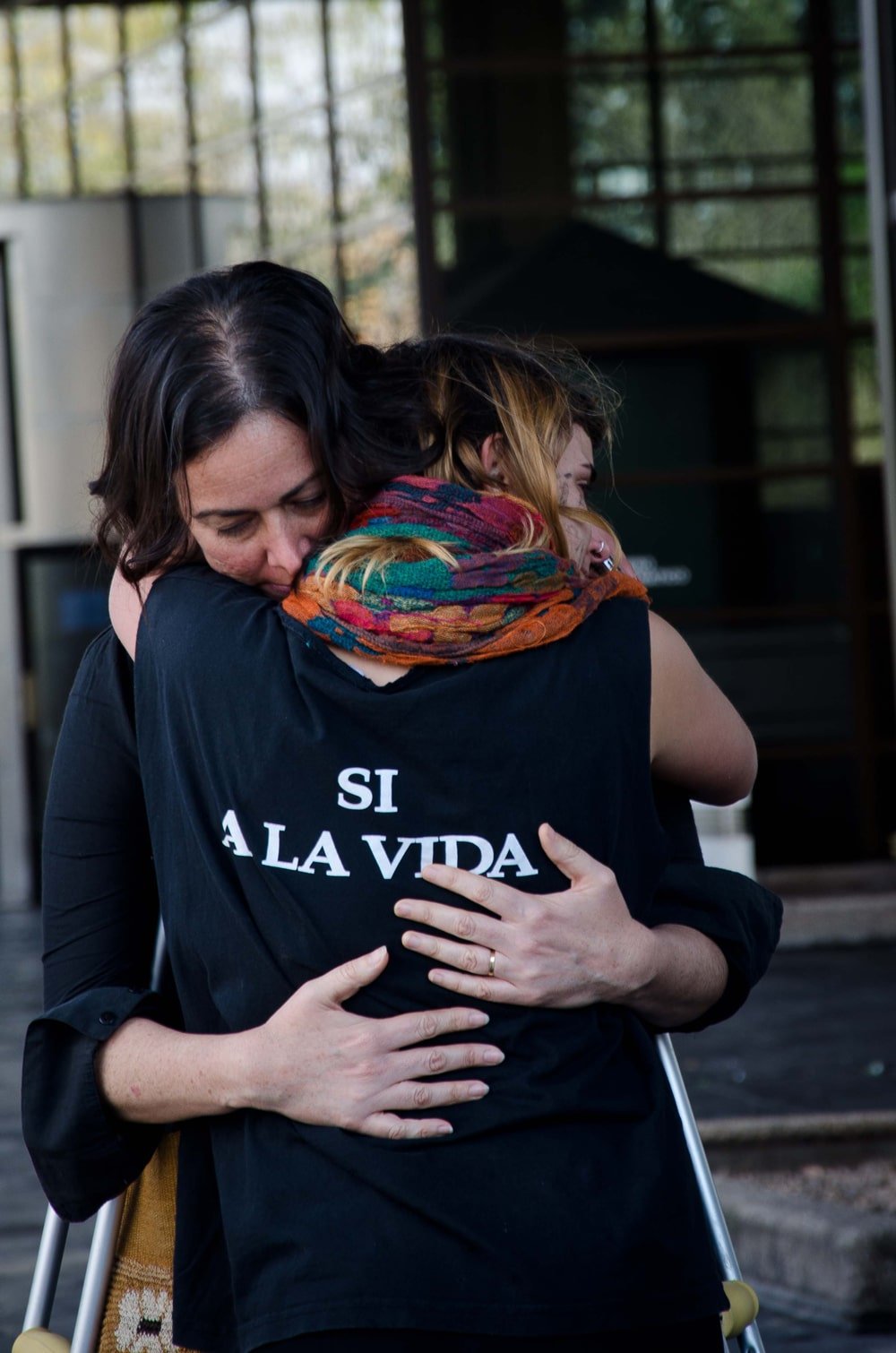 We thank VUDAS for providing images to be used in this report. The photographs in which the credit is not indicated were taken by Natalia Roca for Fondo de Mujeres del Sur.