During lockdown, the Mocoví community in the town of Tostado (Santa Fe Province, Argentina) was left without drinking water. The women who are part of Mapik, an organisation supported by Fondo de Mujeres del Sur (FMS) under the Strengthening Environmental Defenders program, built a well to collect rainwater, solving a vital problem. We have wanted to tell the group’s story for some time. We invited Periódicas, a trans-feminist news outlet supported by the FMS as part of the Leading from the South program, to pay them a visit and write about their work.

“So how are we doing this?” Lore asks. “We introduce ourselves and then make up a move and then everyone has to do that same move,” called out the children.

Amidst the din of children playing and roosters crowing, the children go around the circle saying their names: Romina… Ceferina… Delia… Noelia... Gabriela...Victoria… Susel...Hilda.

Their names and their cultural knowledge still bear the marks of the Spanish Conquest. But resistance rolls of their tongues.

It is clear that Spanish is not their native language and their evident discomfort when speaking Spanish disappears when they switch to Moqoit, the language of their people. Mapik is a collective of the Mocoví women of Tostado, a town some 330 kilometres northeast of Santa Fe, the capital of the Argentine province of the same name. 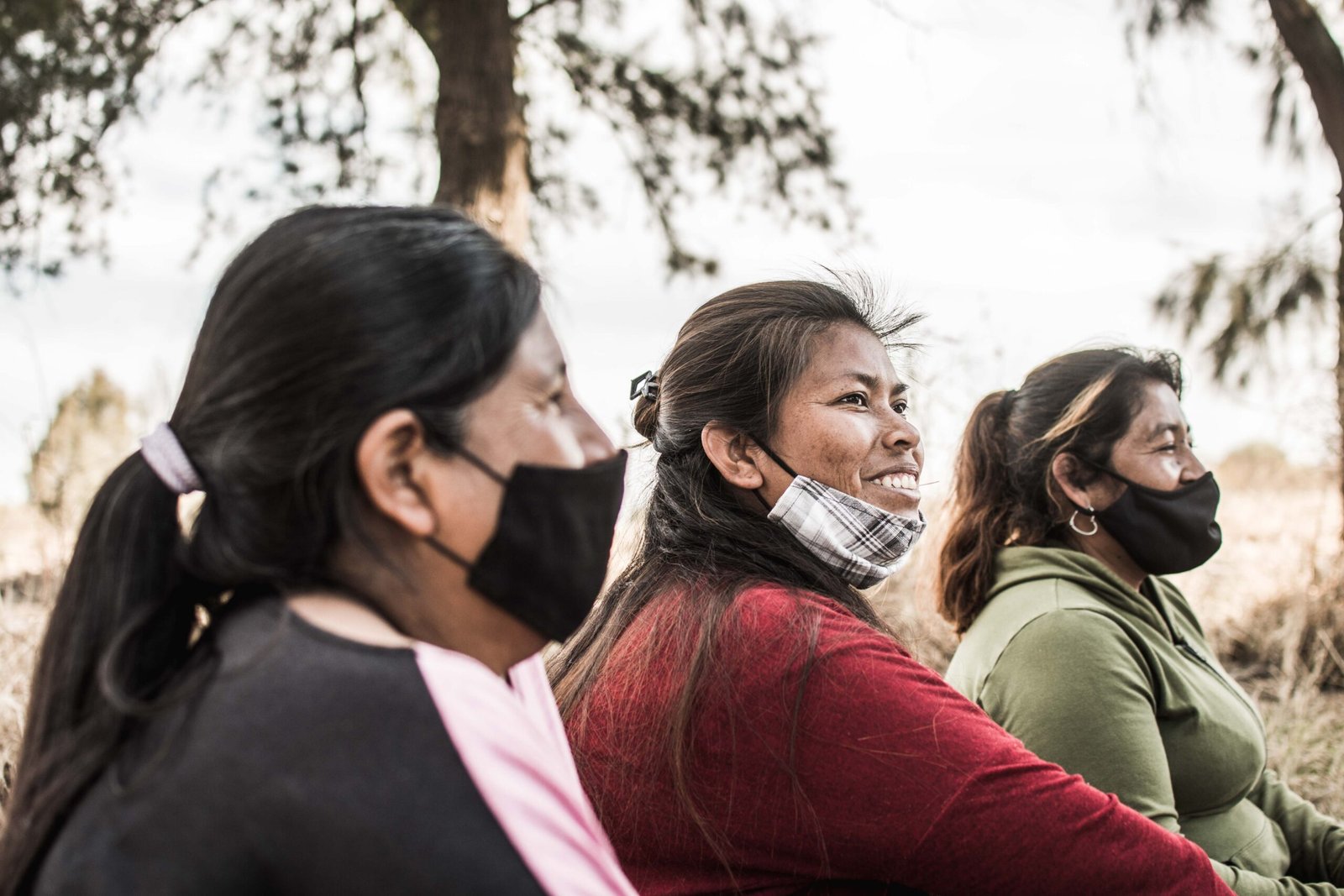 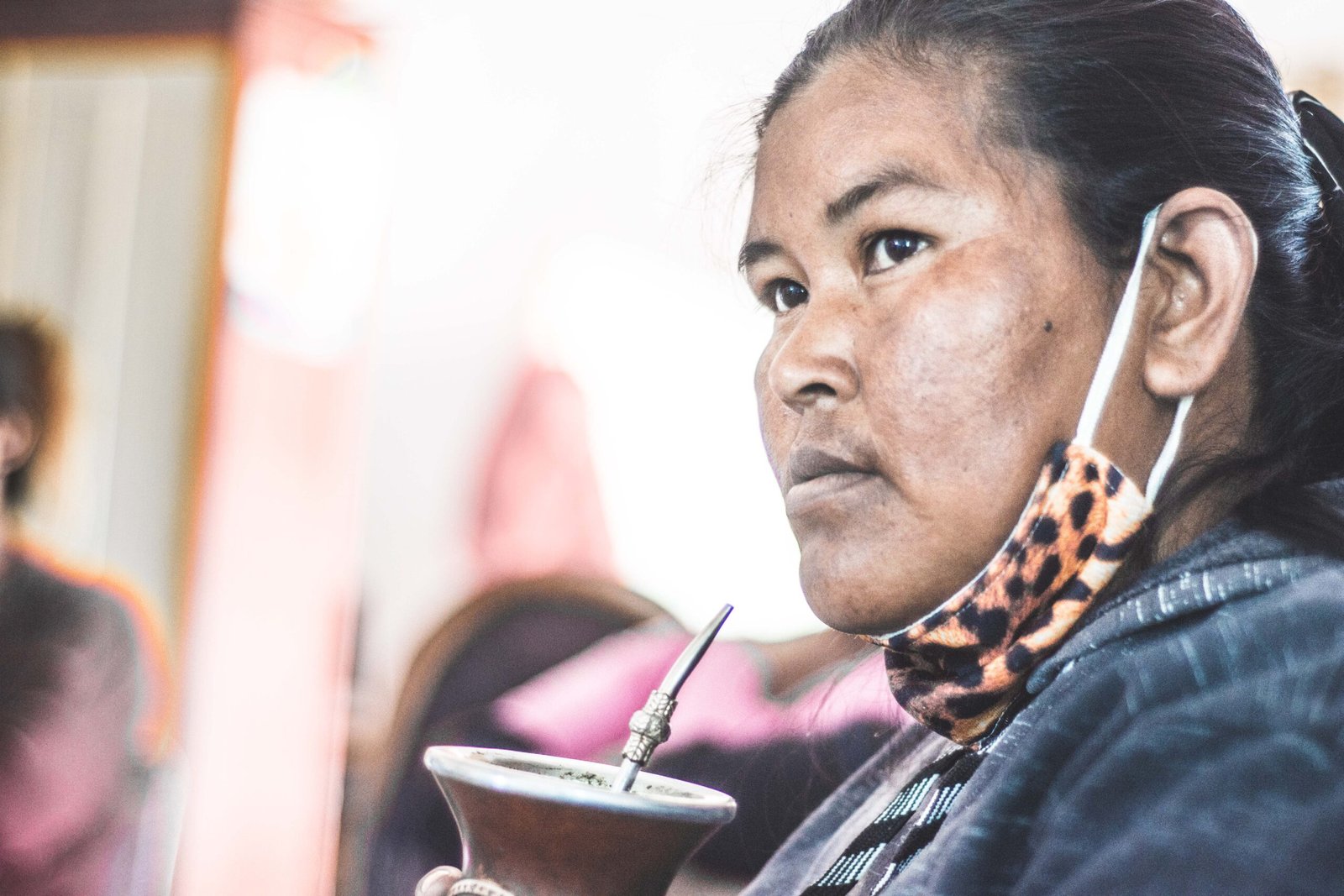 WORKING WITH OTHER WOMEN

Right from its origins, Mapik was about bringing women together. First within the community: “We’ve been doing things together since we were little. We always got together to gather firewood together; we would head out each morning and come back early evening. About ten years ago, we go an invitation to join a women’s soccer league, so we asked some more girls to join and put a group together,” explains Romina.

She adds that later, a social organisation in the neighbourhood suggested they organise the snack at a soup kitchen on Saturdays. Later, they also began serving lunch there on Sundays.

Then Gabriela adds, laughing, “Then came ‘la Lore.’” Lorena is part of Gestando Sororidad (Engendering Sisterhood), a feminist organisation from the city that promotes mutual support among women. This group began working with the women from Mapik at the end of 2017.

In the words of one of the women, “I have always liked being part of this because we support one another and have fun together. We do things for local kids or for ourselves, sharing and kicking the ball around. We don’t just stay inside our homes: we meet other people and have fun together.” Another says, “I like getting together because I learn a lot: I didn’t used to go out, I just stayed inside.”

Getting together with others gave them insight into how others lived. The women share some pictures. “Here you can see some women who visited from Córdoba and recorded a few radio spots. In this picture, we are on our trip to Córdoba. We visited Agua de Oro and stopped for a bite. This one is of our visit to Hersilia where we met other activists; we went around introducing ourselves and talked about agrochemicals and contaminants. Ana is the women in this picture, a Peruvian puppeteer who came to visit us. She told us about environmental defender Máxima Acuña and her work. In this picture, we’re at Las Grutas [Río Negro Province], where we attended the Second Congress of Indigenous Women and met our sisters from different ethnic groups. That was a truly beautiful experience. They face the same issues we have here and it’s nice to get together with others: you don’t feel so alone.”

When asked about the concerns they share with other Indigenous women, they mainly mention two: access to water and housing. 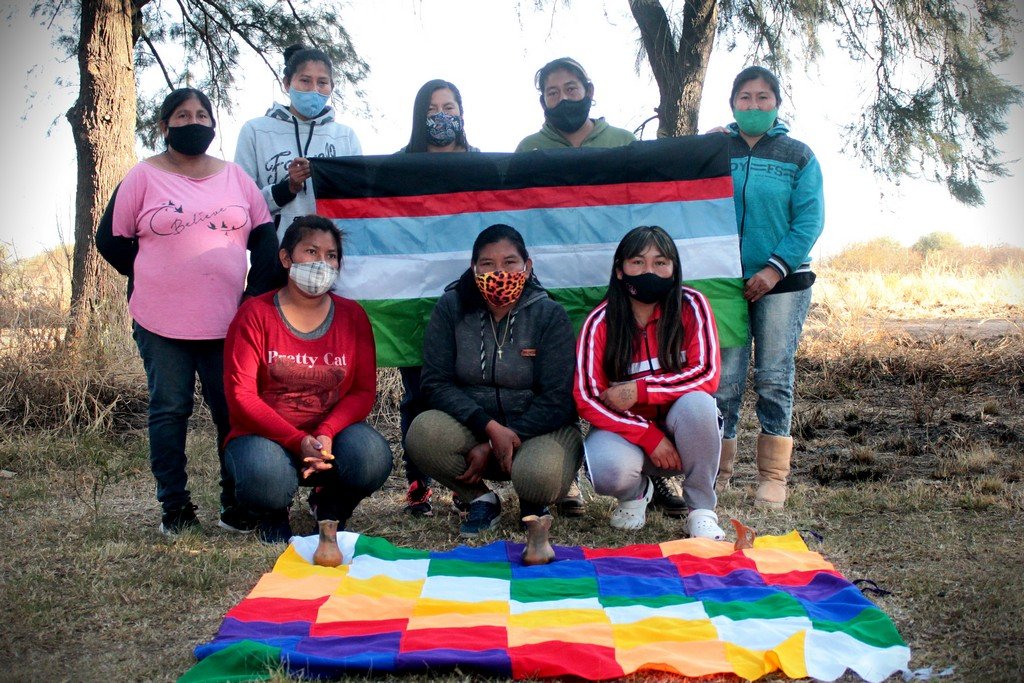 Tostado is on the border between Santa Fe and Santiago del Estero Province; it has a tropical climate with a dry season. In summer, temperatures can easily reach 45 degrees Celsius. The soil is dry with high salinity, which means little drinking water. “We have a cistern and drinking water is sent once a week but that’s not enough for all of us: two or three days later, we’re out. That’s why we needed to gather rainwater,” she explains proudly.

Through the support the women received under the Strengthening Environmental Defenders program (*), the Mapik women were able to organise meetings with other women and build a community rainwater catchment with their own hands. “My sister and I had done some construction before but the other women learned as we went along,” explains one of the women.

This catchment system has a capacity of 16,000 litres. “I am so proud of us: it was tiring but worth it,” explains one of the women in testimonies gathered in the Mapik magazine.

The magazine is another one of the group’s initiatives and is on its third edition. The Mapik have also organised workshops on radio broadcasting, poetry, music, integral sex education, reusing plastics and other topics.

The group’s first meetings were on the soccer field; later they began meeting at the house of one of the women’s uncles and then at the community centre. Now they are planning to build their own centre for their many activities.

The Mocoví people lived in this region before the Spaniards conquered these lands and renamed them Chaco and Santiago del Estero.

There are more than 80 families living in the Mocoví community of Tostado but some travel regularly to and from Chaco. The community lives outside the city where there is no public drinking water supply. The houses are made of cement and tin; a gravel road leads into the community, which then branches off onto dirt roads. The families often gather outside their homes to talk and drink mate. The children play. This is where they socialise, along with the community centre and the Evangelist Church located in the centre.

The women in the community chose the name Mapik, which means carob tree in Moqoit, “the tree placed on the path to eat.” “Like our ancestors before us, we continue to eat the carob fruit. And it’s an important tree because it provides plenty of shade,” explains Romi.

When asked about the Mocoví traditions, culture, dates, rituals and songs, they exchange knowing glances. “No, we don’t know the rituals. Our grandpa used to teach us about them but he died years ago. He taught us how to sing and pray but that was when we were young,” explains Gabi. “There is a Mocoví New Year but we don’t know the history of it; our families that live in Chaco celebrate it but we don’t celebrate it here.” They have grandparents, aunts and uncles who live in Chaco. “We are new here; we grew up here,” they explain. 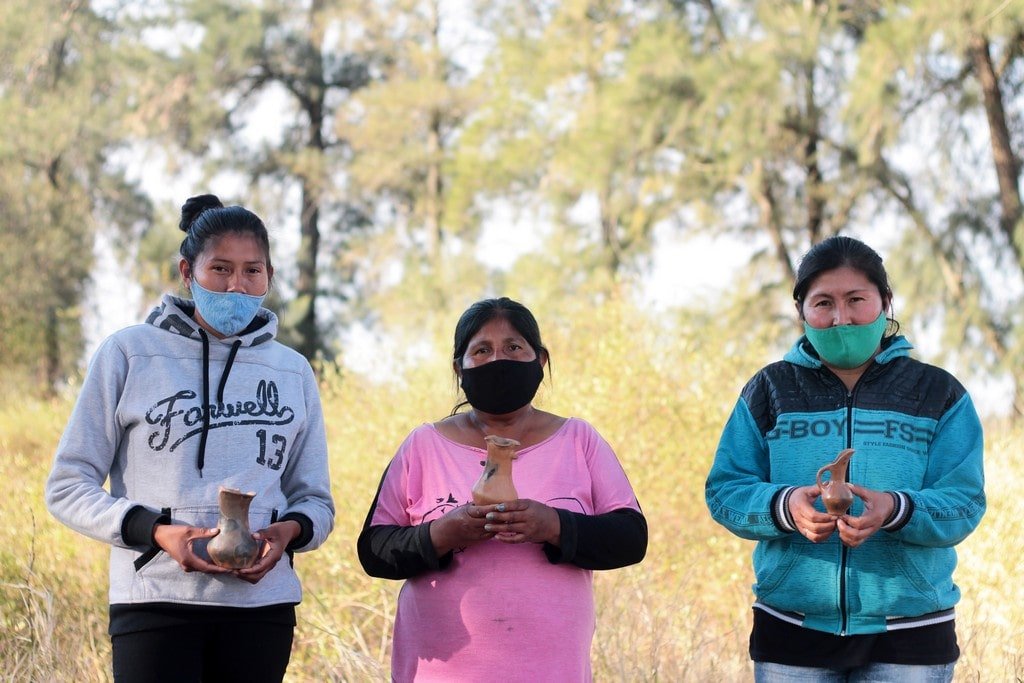 The question about what it means to be a Mocoví woman elicits laughter and hesitation. Finally, the women say that their identity is linked to their language, which has been passed down from generation to generation. And their relationship to the land. “From the time we were girls, we saw our parents going out into the fields to harvest cotton and we grew up seeing how much they respected the land. Wherever they went, they always asked for the land’s permission, because they said that’s where its true owners live. That way, they wouldn’t be harmed,” explains Romi.

This harmonious relationship with nature is an important part of life for them. “They never got sick. Now, they are constantly clearing the land and it’s getting hotter. The sun hits harder and that means we have less water. So we are getting sicker more often. In the past, we almost never got sick—not even our elderly,” they explain.

“Harvesting cotton and going into the woods to gather: that’s part of being Mocoví,” they explain, laughing now and then. “We gather the fruit of the mistol tree, the carob tree and the tuna cactus along with a ton of other fruits whose names we don’t know in Spanish. So that’s complicated when people ask.”

Besides gathering and harvesting, they weave and make handicrafts from ceramic. The men do odd jobs in construction or logging. “We stay here, looking after the children,” they explain. 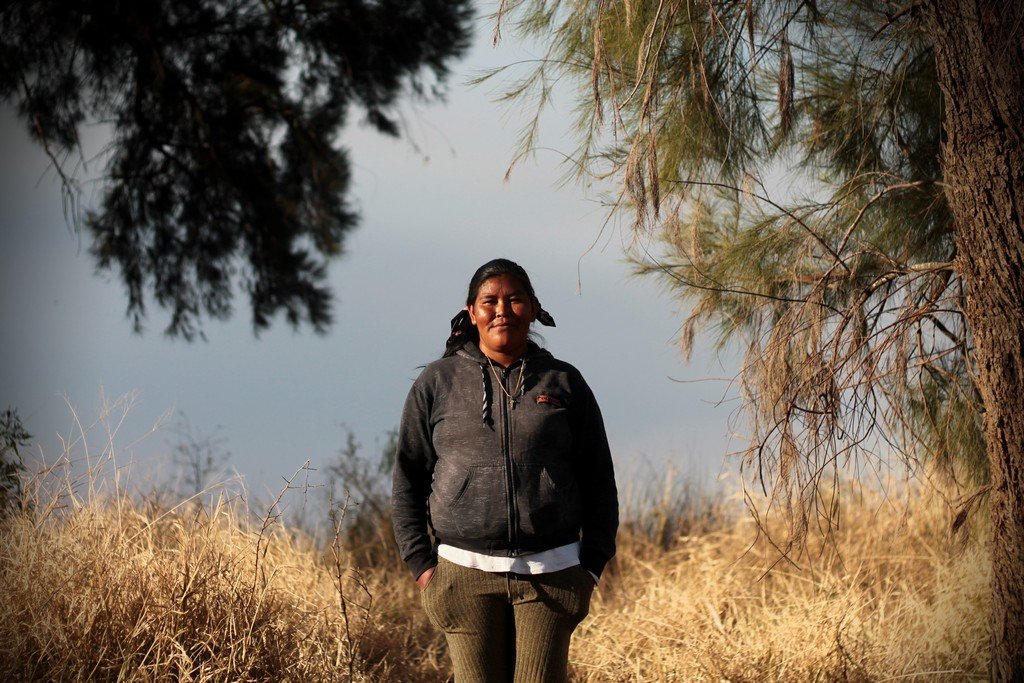 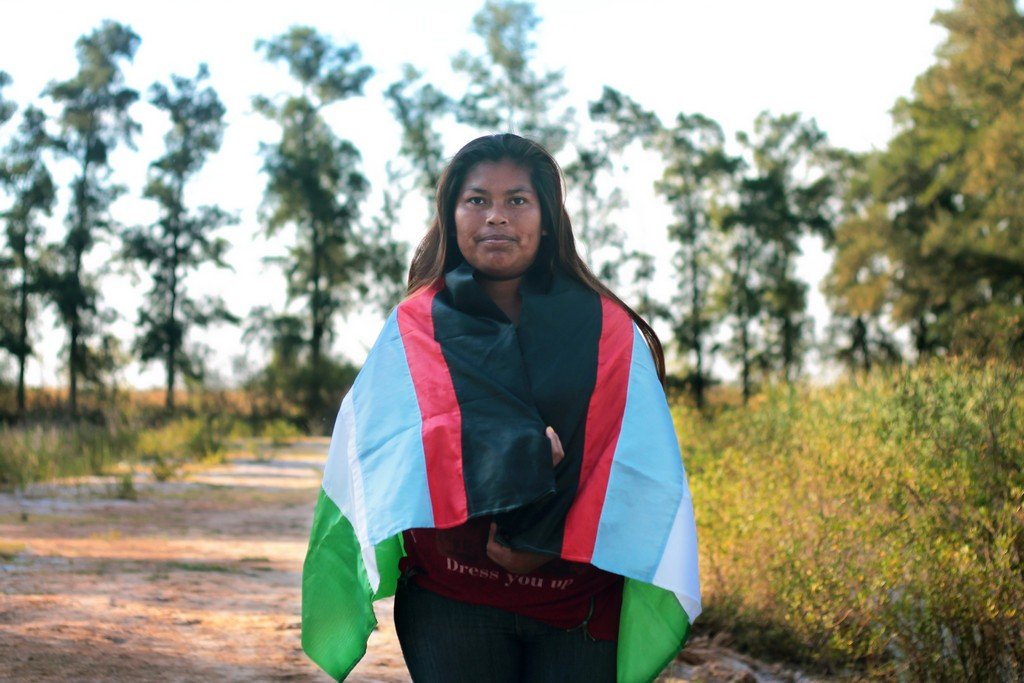 THE ECOSYSTEM OF THE MAPIK

The sexual division of labour can be felt not only in the households but across the community. The Mocoví of Tostado choose their leaders (chief, vice-president, secretaries, spokespeople) at assemblies. According to the Mapik, the authorities can be either men or women. However, men are generally chosen for these posts and gender equality thus exists in name only.

With regard to how the community women organise amongst themselves, they have this to say: “Some of the men are glad to see us working together; others, not so much.”

Despite some raised eyebrows, they continue pressing forward. The dream that they are currently focused on is having a space of their own. They plan to build it themselves so they can get together any time and plan more activities. “Being part of a group gives you the strength to continue building and move forward with the struggle,” they say in a tone that is friendly yet firm. Like the carob tree, they grow slowly but hold steady. They grow roots, give fruits and provide shelter.

(*) Grupo Mapik is part of the Fondo de Mujeres del Sur program Strengthening Environmental Defenders, which is implemented in alliance with Fundación Plurales and co-financed by the European Union.